A Little Bit About HelmetsR

A Little Bit About HelmetsR 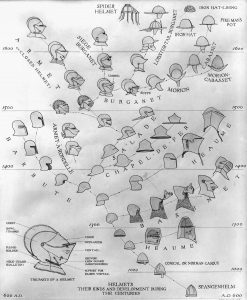 The helmet or helm was developed to keep up with advances in weaponry of the times.  Helmet history is fascinating, and chronologically speaking, the helmet is innovation itself. Hickory Arms offers a changing variety of historical and reproduction helmets for you to choose. All the helmets on our website can be worn, and many are functional battle ready helmets.

Corinthian Helmet – 8th century B.C.E.: Probably one of the most iconic war helmets of history, the Corinthian helm gives excellent, overall protection to the head whilst giving suitable allowances for vision, hearing and breathing without excessive obstruction.
Though it is a very practical helm, the Greeks made sure it was suitably stylized; the added eyebrows, stylized eyes and elongated faceplate portrays a noble, yet intimidating look.

Spangenhelm – Too many pieces

Spangenhelm, 6th to 10th century: These types of helmets were usually a bit conical (pointy toward the top). They usually have cheek pieces and can be highly decorated, sometimes have face masks, and occasionally have chain mail aventails that protect the back of the neck.

Nasal Helm/Norman Helm, 11th to 13th century: The height of their popularity is in the 11th-12th centuries. These helmets gradually replaced the spangenhelms because of their one piece skulls. They’re called nasal helms because of a piece of metal that extends over the nose.

Kettle Helm. Not to be confused with a cooking pot.

Kettle Helm, 11th century: The 11th century is when the “Iron Hat” was most popular, but variations of this type of helm have existed all the way into World War II. Many variations of these helmets exist, but all have wide metal brims, and most do not have any sort of face protection.  They were NOT used for cooking the daily meals.

Cervelliere, 12-14th centuries: Excellent for protecting the top of the head from sword blades, it w